Every once in a while, I come across games in the open-world genre that don’t try to reinvent the wheel (ex. Grand Theft Auto), carving a legacy for themselves in the process. Sleeping Dogs is a prime example of this. With many exciting vehicles, weapons, characters, and missions, Hong Kong will never be the same.

The story is centered around a man named Wei Shen, a police officer who has been transferred from San Francisco to his native area to investigate/infiltrate a war centered around two major gangs: The Sun On Yee and Water Street, with numerous triad branches representing each. As the bullets fly and Wei’s loyalty on both sides is constantly tested, he must make crucial and sometimes deadly moves to secure his future.

The Definitive Edition contains three major story DLC packs, along with a wealth of collectibles/cosmetics to utilize throughout whichever mode you choose. The first story pack is called Nightmare in North Point, which explores a supernatural horror concept. Wei encounters ghosts, vampires, and possessed gangsters as he attempts to rescue his girlfriend, Not Ping, from Smiley Cat, a casualty of the triad crusade prior to the events of the game.

Zodiac Tournament is the second story pack and is integrated into the main story as opposed to being a standalone mode. It adds a location known as Zodiac Island where Wei is invited to an exclusive tournament that consists of Asia’s most dangerous fighters. It pays homage to 70s Hong Kong movies — more specifically, the works of Bruce Lee and provides many more cosmetics and collectibles to obtain.

The third and final story pack is known as Year of the Snake, which serves as an epilogue to the main story. When a cult orchestrates numerous terrorist attacks across the city in the name of an impending apocalypse, they must all be brought to justice by any means necessary, preventing the Chinese New Year from devolving into a disaster.

The gameplay is always a fun experience, particularly in the aforementioned combat. You are given several basic fighting moves to start and have the potential to gain many more by collecting Jade Statues, which are scattered all across the city. There are also many counterattacks to utilize when surrounded by groups of enemies and in need of a quick strategy. The cars you can take around the city can be put to the test in races, with experience points granted only when you finish in first place.

Overall, Sleeping Dogs is an amazing game that puts forth stellar effort in recreating Hong Kong and the people who inhabit it. With a strong cast, visual splendor, and a story that creates a unique approach to open-world games, you’ll have the time of your life in a home away from home.

The Witcher 2: Assassins Of Kings Review 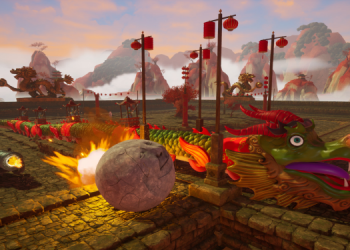 Rock Of Ages 3: Make & Break Review: Rock On With Your Bad Self

Anime Book Club: Top 5 Isekai Series You Should Be Watching

Warcraft III: Reforged Is Now The Worst-Rated Game On Metacritic